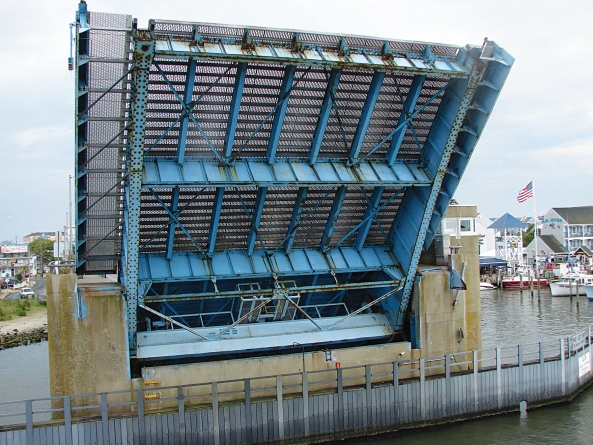 (Aug. 15, 2014) A debriefing to discuss the city’s response to the July 26 Route 50 Bridge malfunction, held last Friday, revealed little that could’ve been done further from a public safety standpoint.

But what the city did grapple with, during the five hours in which the drawbridge was stuck in the open position, was a lack of access to its own electronic signage.

“Those signs are actually not easily accessible to us,” said city Communications Manager Jessica Waters, referring to the programmable signs at the convention center on 40th Street, the West Ocean City Park and Ride, and the tennis center at the Route 90 Bridge, which were not able to display emergency messages until well into the incident.

Apparently, the city’s electronic signs – which have been installed piecemeal over the years – are each run via an independent dial-up connection to sign-formatting software installed on a single computer used by an employee in the convention center.

If this person is not available during evening or weekend emergencies, someone will have to gain remote access – but this requires them to have the necessary login data, and be near a computer of their own with remote login capabilities.

“Basically, someone needs to be at that computer, or be at their computer,” said city Webmaster Bill Funkhouser. “The plan, I believe, is to get those sign programs on our network.”

If migrated to the city’s main system, the sign programs could be made directly accessible from the city’s central network, which is easily accessed by any employee.

“Improving access to those is something we need to prioritize,” said Mayor Rick Meehan.

Waters also noted that he State Highway Administration would be added to the town’s Joint Information Committee, which was established after Hurricane Irene for potential evacuation purposes. The committee includes a number of local business associations and civic groups.

The JIC was not called during the bridge incident, Waters said, but probably would be in the future with the addition of the SHA. A meeting of the committee is scheduled for Sept. 3.

Officials also noted that the city’s fledgling FM radio station, which runs on the 99.5 and 100.3 wavelengths, was extremely helpful in broadcasting an emergency message advising motorists to detour to Route 90 or Route 54 in Delaware. But the city’s promotion of the FM station has so far been limited

“We need to start educating the public that we have that,” said Emergency Services Director Joe Theobald.

The city is also in the early stages of planning for the replacement of its main emergency dispatch radio system, with a cost currently projected at over $9 million. City Electronic Services Manager Bob Dimaio is currently putting together a staff committee to review options.

“We take for granted our communications in a situation like this, but that’s not always the case everywhere,” Dimaio said. “Please take this process seriously…so that our next radio system is as good or better than what we have now.”

Through said radio system the city’s fire and police departments were able to coordinate a number of response options, although no major emergencies occurred during the bridge malfunction.

“At no point did we believe our citizens or responders would be in a position they couldn’t handle,” said Ocean City Fire Department Chief Chris Larmore.

Critically, the department was able to quickly make arrangements to call in additional ambulances, as well as securing boat transport using its own fire boat as well as private vessels.

Further, the department was prepared to implement its plans to use the Boardwalk as a fire access lane, given that north-south passage would’ve otherwise been impossible for large equipment.

The SHA performed repairs to the bridge this week on Wednesday and Thursday, closing one eastbound lane of the span.  Additional partial closures are expected later this fall and winter.

The July 26 malfunction was caused by breakage at one of the four points where the driveshaft of the motors, which articulate the bridge, connect to the two leaves of the span itself. The initial failure was patched by welders early in the morning of July 27. However, SHA contractors will be cutting out and replacing all four contact points, which have suffered heavy rusting.

The malfunction also served as a renewed call by city officials for the SHA to fast-track the dualization of Route 90, which served as a detour during the closure.

While the construction of a new Route 50 Bridge is possible, the state would need to acquire land to build a new span parallel to the current structure, making the project parameters much more difficult to gauge.

Route 90 already has the right-of-way needed to build additional lanes onto the existing bridges, however, making it a much more readily-available improvement.

“If Route 50 had been down during an evacuation, we would be in bad shape,” Meehan said. “I think this shows how important it is to have the extra capacity on Route 90.”