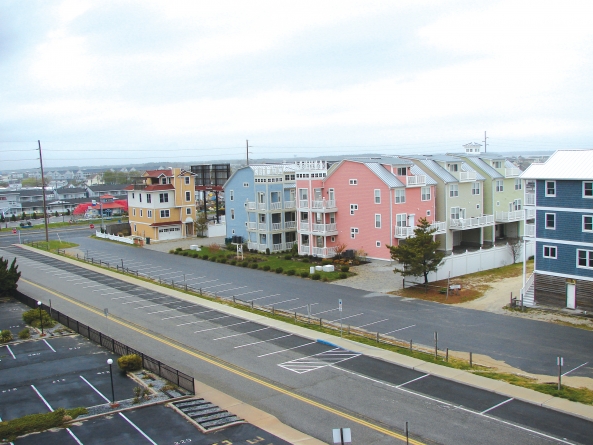 (May 10, 2013) Ocean City Council continued to take a beating during the public comments section of this week’s meeting over its budget decision to install more paid parking meters around town, particularly on 146th and 131st Streets, where parties from both locations accused the city of making secretive decisions in order to limit the political fallout from fee increases.

Under the current budget proposal, the city would be installing meters on 131st Street between Coastal High-

way and Sinepuxent Avenue, a stretch of street parking that is often used by customers of the Crab Bag restaurant, as well as on the ocean block of 146th Street where Ocean Place condo residents often park.

“To be told by [City Engineer] Terry McGean that ‘I’m not responsible for what goes on behind closed doors’ is not what I wanted to hear,” said Crab Bag owner Nolan Graves.

McGean said later this week that was not, in his recollection, what he had said.

“I told Nolan that I presented a number of different alternatives [for parking] to the council, including the ones I thought were the simplest to do, such as 146th, 142nd, his street, 59th, 60th, and a lot of others,” McGean said.

He had not, McGean said, implied that there were any back-room deals, only that the ultimate decision lay with the council, not himself.

However, the exact reason why the council pulled the parking trigger on some streets and not others is likely to be an ongoing debate.

When the decision was made last month, it was mentioned that Graves already had plans to expand his restaurant – and add a considerable amount of on-site parking, reducing street demand – following this season. Council members took this as a sign that parking could be introduced there with less wallet-related trauma and an easier period of adjustment.

However what the city apparently saw as an opportunity, Graves sees as unjust punishment for doing well. If growing one’s business means that the city is going to co-opt you for parking revenue, Graves alleged, the resort is creating a dis-incentive for success.

“Targeting it financially because of that is wrong, and it’s going to cause problems elsewhere … if it’s going to creep into every successful business,” he said.

Graves also objected to the suggestion – frequently made by city officials – that paid, timed parking would help business in commercial areas by encouraging customer turnover.

“I don’t need to encourage turnover at a restaurant. When they’re done, they’ll leave,” Graves said.

He also pointed out that the city had floated the same concept for the parking lot at the convention center, but decided against it.

“There’s no other city I know of where you can get free parking when you go to events,” Graves said. “You’re saying [paid parking] is going to help mine, but you don’t want them there because it might hurt yours.”

Although not a commercial street like 131st, residents of the Ocean Place condominium on 146th continued to press council on similar concerns, namely that paid parking would discourage full use of their building.

“When friends or relatives come visit us, they park on the street,” said condominium association head Ron Deacon. “Now they’ll say, ‘We don’t want to pay all the money, why don’t you come see us?’”

The condominium has parking spaces assigned to units through their deed covenant.

“It’s very clear that we have one or two spaces, and that’s the way it is, and it can’t be changed,” Deacon said. “If you go to other condos like ours one or two or three streets away, they don’t have that problem.”

“The reason that any other street in town was not picked was that they were residential on both sides,” said Councilman Joe Mitrecic. “That was the theory behind the streets picked.”

“There are 62 spaces on 145th that also abut the Ocean Place property,” said Mayor Rick Meehan. “I think that was the consideration that there are spaces that are there and will always be there [for residents.]”

However, Ocean Place owners remained skeptical of the council’s procedure in making the decision.

“The way we found out about this was in the breach, not directly,” said owner Michael Feen, who lives most of the year in Howard County. “When something like this is done in Howard County, notices – big plaques, even – are put up on the street.”

“I think you made some good points about giving notice,” Meehan conceded.