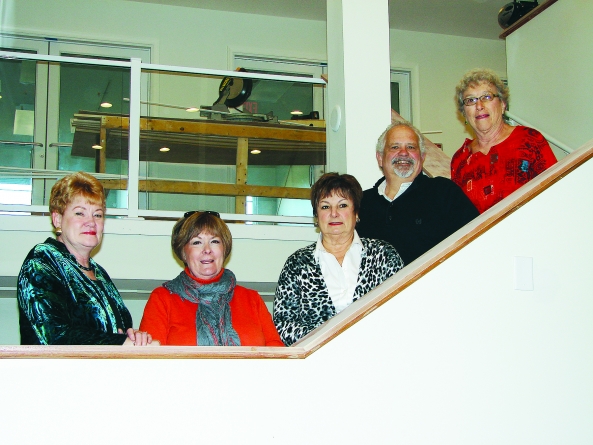 (Dec. 21, 2012) Despite the cloying mist of masonry dust, the frequent shriek of power saws and the general unease that, at any moment, something large could fall on one’s head, this is Rina Thaler’s favorite place.

“There’s no place in the world I would rather be,” said the newly appointed executive director of the Ocean City Center for the Arts. “What we’re doing here touches every segment of society.”

Thaler’s new, 7,500 square-foot charge is still about a week away from completion. The trim work on the floors and balcony are being tidied up, along with the installation of electrical outlets. But given the building’s specialized use, Thaler already knows – and has for the past year – exactly what each room will be.

“This is the pottery room – the big closet in the back is for the kiln,” she said. “The rear entrance is really just for this, so they can bring the big pallets of clay in.”

Pottery has a certain egalitarian appeal, making it a particularly good draw for the uninitiated.

“People feel like you don’t have to be an artist to try it,” Thaler said. “They’re sometimes intimidated by painting.”

Last week, it was announced that Thaler – a long time member and, for the past five years, president of the Art League of Ocean City – would become the organization’s first paid staff member, as the executive director of the facility that the league had tried for so long to build. Since 1984, the ALOC had operated out of the west end of the city-owned Little Salisbury community park on 94th Street, in a building that Thaler described as a “pool house.” That structure was demolished earlier this year to make room for the new structure.

“With the other building, we were so limited in what we could offer,” she said.

With that in mind, the new center incorporates everything the league has wanted to do over the past 28 years, but hasn’t been able to. Foremost – and most obvious once one walks into the building – is the two-story gallery space, open through the second floor with a balcony running the perimeter.

Berlin-based glassblower Jeff Auxer is working on a nine-foot chandelier to be hung in the center of the atrium. Works will be displayed on the walls of both stories.

“It’ll be seamless as you look up,” Thaler said.

Possibly an even bigger step is the incorporation of individual studios into the building. Four small rooms, each with its own sink, track lighting, and large, north-facing window, will be available for annual rent by local artists. There is also a dedicated retail space for the artists to sell their work.

“On a Friday night, when we have our reception, it’ll be a whole other element,” Thaler said. As it always has, the ALOC will open its doors for a public reception on the first Friday of every month. But the possibility exists now that artists may actually be in their studios, at work, for the public to see.

“It gives them exposure to other artists and the public at a reasonable price,” Thaler said. Rents for the studios are planned to be far cheaper than if one were to simply try to rent a small, vacant space elsewhere in town.

“I myself, as an artist, looked into getting a studio space in Ocean City, but the cost is prohibitive,” Thaler said.

The center will also be available for private events, with two classrooms/conference rooms open to public booking. While smaller – and cheaper – than a hotel hall or the convention center, both rooms will offer kitchens and flat-screen monitors with computer hook-ups.

“A lot of art centers across the county rent out for receptions,” Thaler said. “With the classroom and meeting spaces available to the public, this fills a gap we had in the area.”

The center will be at least partially accessible seven days a week, 365 days a year, Thaler said. Four weeks of art camps are already planned for this summer, to be held in conjunction with the city’s own sports and recreation camps at Northside Park.

“Even though we’re a private nonprofit, they [the city] rely on us for Art’s Alive [an annual festival], for the camps, for a lot of things,” Thaler said. “Everyone these days is looking for something cultural when on vacation … this really fills a void that the town had.”

The deal to build the new Center for the Arts was brokered last year, when the town agreed to fund $600,000 of the projected $800,000 construction, with the ALOC raising the remaining $200,000. This means the city is actually the owner of the building – but it has granted the league a 50-year lease on the property with an annual rent of $1.

Thaler was also able to secure outside grants from the state and other sources, as well as soliciting gifts from local donors. A donors’ “wall of honor” will be near the facility’s entrance and some of the studio rooms will be named for major donors as well. Engraved pavers, which will be set in place on the walkway outside the building, are also available.

“We really had to maximize what we were able to do with the money and space we had,” Thaler said.