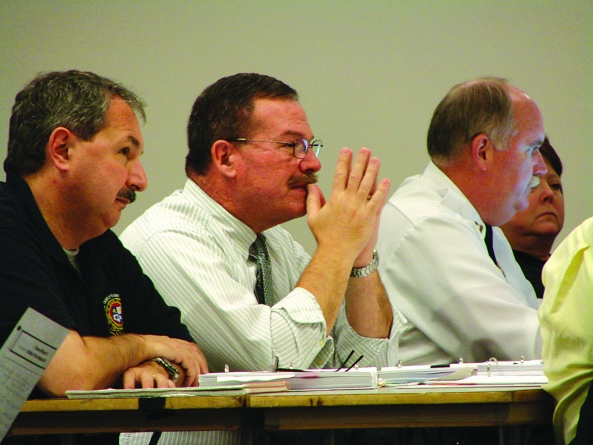 (Dec. 14, 2012) Anticipating the departure of Police Chief Bernadette DiPino at the end of this month, city officials announced Tuesday that the Ocean City Police Department’s three division captains will be rotating duties as interim chief until a long-term OCPD head is selected.

City Manager David Recor said during this week’s mayor and City Council meeting that the council has approved his recommendation “to rotate the three captains on a 45 day basis as chief of police until a permanent replacement is found.”

In October, DiPino was tapped to take the top position at the Sarasota, Florida Police Department. A 25-year veteran of the OCPD, DiPino had served as chief since 2003 and was already committed to retire in October of 2013 under the department’s Deferred Retirement Option Program. She will begin her new post in Sarasota on Jan 1, 2013.

“Our goal is to have a police chief named by the start of the [summer 2013] season,” Recor said this week.

The city has not yet begun to accept applications for the job, and Recor could not say whether or not any of the OCPD’s three senior officers intended to apply for the job. He did, however, note that “we’re very fortunate to have qualified candidates in the department.”

The rotating schedule “recognized the candidates we have without giving one an unfair advantage over the others,” Recor said. “I have seen them work very well together during our operations for Hurricane Sandy…and during the strategic planning sessions.”

The rotation will go in order of seniority, with the most veteran captain – Kevin Kirstein – taking the first shift. He will be followed by captians Michael Colbert and Greg Guiton, respectively.

Although it was widely speculated, immediately following DiPino’s departure, that the city would be hiring a professional recruiter to conduct a search for her replacement, Recor said this would not be necessary. The job opening, he said, has already been widely publicized in the law enforcement community, and the city will need no help in finding candidates.

“We don’t need a headhunter to facilitate the recruitment process…our challenge now is to find a police chief that fits the Ocean City community,” Recor said.

To this end, Recor has commissioned the International City Manager’s Association’s Center for Public Safety Management to develop a selection criterion, specific to Ocean City, which the town can use to evaluate candidates.

It was very important, Recor said, to have the ICMA-CPSM “develop the assessment process for the candidates” in a way that was customized to the resort’s needs.

“Somebody may look good on paper, but still just not be a good fit,” he said.

The criteria system is set to be finalized on Jan. 17. In the meantime, Recor said he has reviewed and updated the official job description for the Chief of Police, which had not been done since 2002, before the last selection process.

“Today, I received the Mayor and Council’s feedback, and will be doing some more revisions to the description,” Recor said. One of these, Recor pointed out, will be that candidates will now be required to have certain levels of FBI accreditation.