(Sept. 26, 2014) When eight candidates for Worcester County Commissioner met at a political forum at the Ocean Pines Library last Wednesday, they did agree on two subjects: the local economy continues to need help and most residents who meet the age requirement don’t care enough to vote. 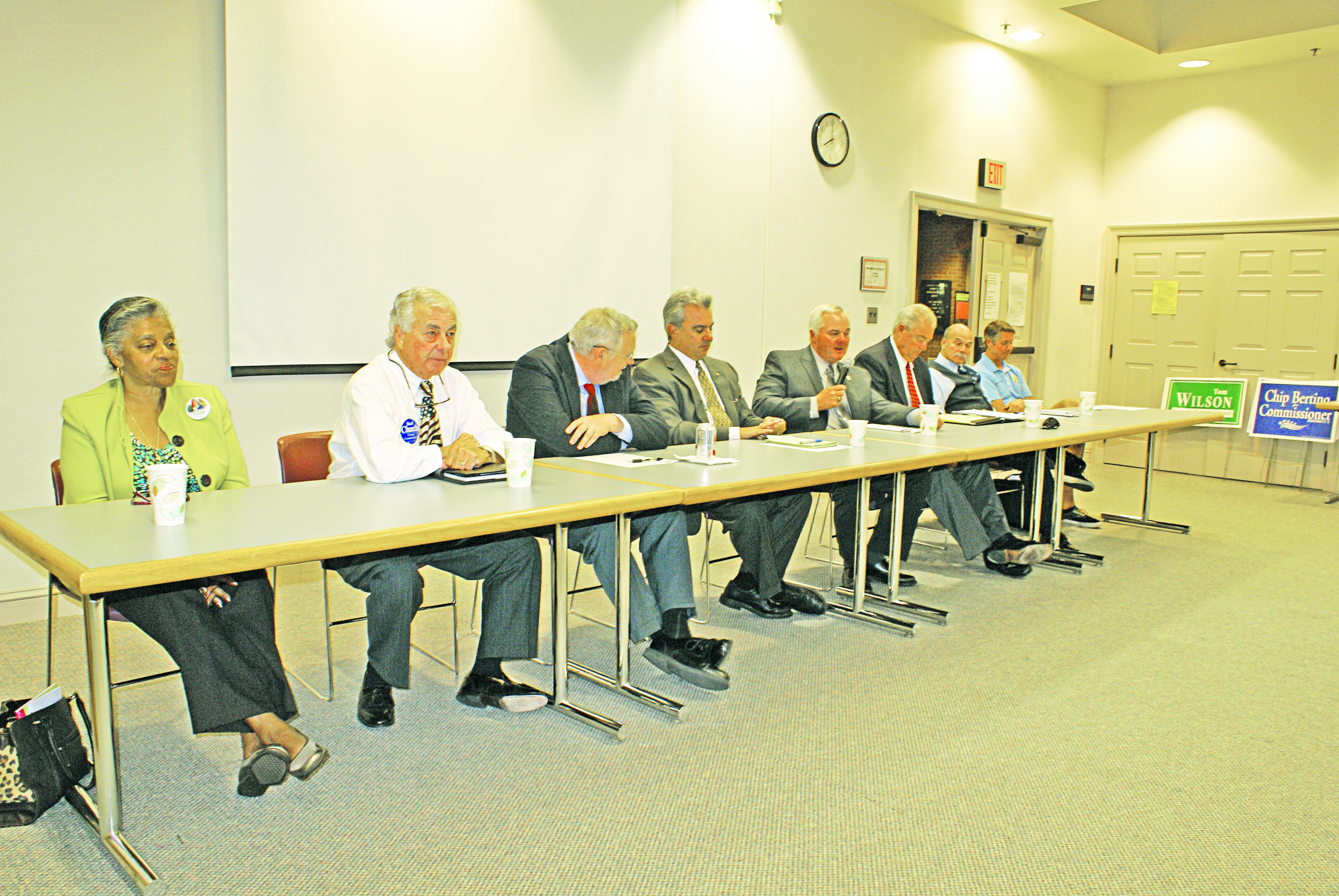 Also covered were the need for a new elementary school at Showell, the expansion of Route 589, the community’s share of proceeds from gambling revenues and state government’s apparent lack of concern about local problems.

Although the majority of the questions came from the audience, moderator and Ocean Pines Chamber of Commerce Director Will Cathell got the ball rolling, asking candidates how they would bring new full-time jobs to the county.

Many of the candidates used the opportunity to tout Worcester County Economic Development Director Bill Badger.

“We are working every day in bringing new economic development to the county under Bill’s leadership,” said Church.

Wilson said Worcester County had the lowest average wage of any jurisdiction in the state.

“And November through April we have the highest unemployment rate,” he said. “I see it all the time – people who can’t support themselves and support their children. We definitely need to do better. We can’t continue to look for seasonal jobs.”

Bertino said the county needed to use its “great deal of imagination and ingenuity” to “spur and spark and ignite business opportunities within the county.”

Citing a 1998 survey in which he took part, Shockley said researchers found one reason for businesses failure to locate here: “And that was (the absence of) broadband,” he said.

The funny part, Shockley said, was what made headlines the next day.

“I stood up and basically said the Eastern Shore of Maryland was a third-world country,” he said. “And they publicized that. Low and behold certain people didn’t like that, but sometimes you’ve got to say certain things in order to get movement out of Annapolis.”

“There’s probably a lot more going on in the county than you’re aware of because it isn’t something that you see that just pops out of the ground,” said Church. “There is new employment coming to the county. It doesn’t appear overnight.”

“One of the reasons wages are so low in Worcester County is because our two biggest industries are hospitality and retail,” said Wilson. “That’s not what we need. We need good year-round full-time jobs.”

Shifting gears to a more specific concern, a member of the audience asked Wilson and Bertino if they would push for Route 589 dualization.

“Having sat in the commissioner’s room for the past four or five years, there isn’t a commissioner up there who hasn’t brought 589 to the forefront anytime they had an opportunity to talk to state highway administration,” said Bertino. “We’re looking at about a $330 million dollar project, but there is absolutely no money for the project.”

Bertino conceded that the dualization could take another 20-25 years to complete.

“The commissioners have pushed to have 589 looked at and widened, and I can tell you that as a commissioner myself if elected in November I will join them in pushing as best we can,” he said. “But quite truthfully, we need the help of our state legislators to help get the money down here.”

Wilson said the very first item on his agenda was urging action on 589.

“Every time I go out on 589 it gets frustrating,” he said. “We need to do better. We say, ‘We can’t do it,’ but of course we can. We need to use all our resources to talk to the state to promote this as an urgent matter.”

As for using local money, Church said highway user fees that pass from the state to the county have sunk from $5.5 million to $249,000.

“You tell me how a county with about 3 (000) or 4,000 miles of roads can maintain their roads and build a new one in Worcester County – it can’t be done,” he said. “What we need is a change at the state to stop taking county monies to put in the general fund to fund a deficit they can’t afford. That’s where it has to stop.”

Mitrecic said the county “dropped the ball” by not demanding improvements when the casino was built.

“They would have jumped through a ring of fire to put it there,” he said. “I believe the county at that point in time dropped the ball by not making them dualize the south end of 589.”

Bunting said the state projected zero spending on the project from 2014-2030.

“You people need to put people (at the state) that are going help us get what we need to get done,” he said.

“We need that school regardless of whether we’re going to widen that highway or not,” she said. “Our kids should not be going to school in substandard buildings.”

Because of their cautious spending, Church promised the commissioners would not raise taxes in order to pay for the school.

“We’ve been very conservative and we’ve put money aside,” he said. “There will not be a tax increase to you or anyone else because of the way that we’ve managed our money.”

Bertino said he had three children who attended Showell Elementary.

“Each of our three kids was in one of those nine trailers that are out back,” he said. “We need a new school.”

While he backed the idea of the school, Bertino questioned the price tag.

“The cost is about $40 million dollars – that seems like a lot for 555 students,” he said. “I want to see a new school, but I would very much like to see an accountability for $40 million. It seems to me that we can build a school for less money. We don’t need it to be fancy. We don’t need children who are going to classrooms to have wild designs on the walls or marble on the floors.”

“The state requires us to spend a lot of money that I think is unnecessary for these buildings,” he said. “We don’t need to build Taj Mahal.”

“We need to get our children out of trailers,” Mitrecic said. “I agree the price tag might be a little high … but the school needs to be replaced.”

Keith Keyser, an Ocean Pines resident who moved from the West Coast six months ago, asked if the commissioners could do something to encourage more medical provisions in the county, specifically primary care physicians.

“My wife is from Connecticut,” he said. “Her primary care doctor – is in Connecticut.”

When his wife recently took a spill, he said he had to call in a favor to have her seen.

“I can tell you the hospital is working diligently to bring in additional physicians,” Church said. “In West Ocean City there’s going to be two new facilities with primary care doctors, so they’re working on that every day. There’s new doctors coming in.”

“You’ve been here six months and haven’t been able to find a primary – we’ve been here 25 years and have had that same difficulty,” Bertino said. “It’s not a problem that’s new to the area.”

Grant Helvey, who ran against Bertino for the District 5 Republican nomination, said he recently learned that 65 percent of graduating students from Worcester County high schools who enrolled in Wor-Wic Community College were required to take remedial courses.

“We get told as county commissioners, ‘It’s none of your business – it’s the school board’s,’” Shockley said. “I will say to you that those numbers are correct and it’s English and math that are the two things that are tripping them up.”

Church said the blame belongs at the top.

“During the time that I was in education … our country was in the top 10 in providing education to our children nationwide,” he said. “We have dropped out of the top 30 in the world. That’s where the problem lies.

“I think our nation is lowering its standards,” Church continued. “It’s not the county that’s doing that – it’s not our local board of education – it’s our national leaders. They want this country to appear that they’re doing much better than they are. You need to start at the top.”

“When they said, ‘no child left behind’ they started screwing things up real good,” Purnell said. “I’m concerned about the sign at Stephen Decatur (that reads) ‘a world class school system.’ It’s not world class if we’ve got to take remedial classes at Wor-Wic.”

Ocean Pines Association Board of Directors President Dave Stevens asked the members of the forum if they believed the current distribution of funds from the Ocean Downs casino was fair.

“We don’t know if we’re going to get one penny,” he said. “We’re asking for an answer from the gaming commission.”

Shockley said the commissioners had little control over the matter.

“That’s not our call,” he said. “That bill would have to be amended at the state level.”

Cathell asked how each candidate would work with the state to help the economy in Worcester County.

Shockley added that the state was endangering the poultry industry.

“The stupidest idea that’s ever been placed was the 5 cent chicken tax,” he said. “It shows you the level of not caring about the Eastern Shore. And you just scream, you scream some more, and you do what we did with Routes 12 and 113 and basically they just got tired of us. After five letters and all the screaming, at some point someone will blink.”

Bertino called for the voters to help the commissioners.

“One thing we can’t do is we can’t sit here in Worcester County or Snow Hill and tell everyone in Annapolis, ‘You’re stupid, you’re ignorant and your children are ugly – by the way, would you send us some money?’” Wilson said. “We need to figure out a way to work with them.”

“Next year they’re taking another $300 million out,” he said. “We cut, we cut, we cut, not raising taxes because we all work together. We have Democrats and we have Republicans, and you have one of the best county commissioners – in my humble opinion – in the country. Our problem is not at the local level – our problem is at the state level. You can’t tax your way out of a recession and you can’t tax your way into prosperity.”

“They feel like they don’t have a voice,” he said. “That’s really sad.”

Wilson noted that the OPA televises its board meetings and called for the same treatment with county commissioner’s meetings.

“We need more transparency,” he said. “We need to do better. We need to make sure that people do have a voice that we hear, and we understand their concerns.”

Mitrecic said many young people do not have time to vote.

“My mother lived to be 88 years old,” Shockley said. “She died Oct. 30, 2008 and she voted in that primary because it was her obligation to. And that’s what you’re missing.”

Shockley said only 18 percent of voters turned out in his district during the last primary.

“People will call you up and complain about a lot of things, but never take the time to vote,” he said.

Creepy Creatures of the Coastal Bays

The 4 Best Happy Hour Specials in the Ocean...