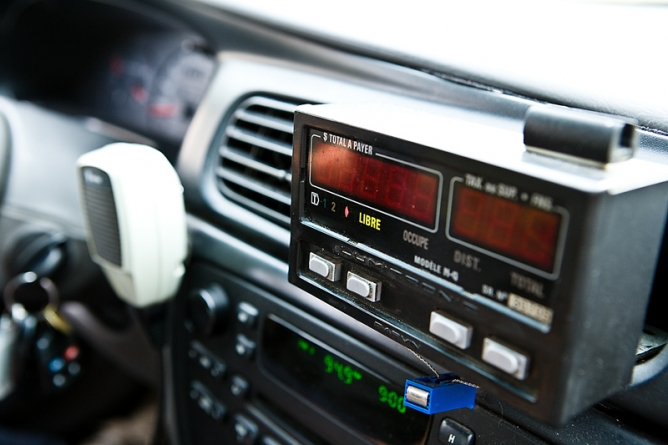 (March 14, 2014) Local taxi operators continued to press the city’s Police Commission this week on a proposed increase to the city-imposed ceiling on cab fares.

The commission voted Monday to move the issue to the full mayor and council for further hearing.

Donohue proposed an increase from the current $2.20 per mile to $3.70 – a considerable hike, but one that Donohue and At the Beach Taxi owner Norm Mullinix said would only amount to an extra $3 on the average 35 to 40 block trip up or down Coastal Highway.

Cabs are permitted to charge up to $3.00 for boarding, followed by a per-mile rate. The $2.20 rate cap was established in 2009; originally, when the city first instituted taxi regulations in 2000, the rate had been $3.00 per mile, but this was subsequently lowered.

In an email, Mullinix noted that the price of gasoline has risen 50 percent in the past four years, and most cost-of-living indexes have risen 20 percent.

Importantly, taxi companies are free to charge less than the legally proscribed maximum rate if they so wish. The rate cap was established by the city to prevent price gouging of visitors who may not be savvy to the taxi system, and thus protect the resort’s image when it comes to transportation.

“Other carriers will still have the flexibility to charge less, which benefits them,” Donohue said. “We’re going to be the ones that will suffer at first.”

“Any time you have a jump like that, someone is going to go back and undercut you,” said Mayor Rick Meehan. “Then you’re going to get a rash of complaints that people are offering poor service and aren’t charging enough.”

Donohue contended that Nite Club was looking to improve its service in order to attract customers, something it could not offer if the city continued to artificially lower its revenues below market rate.

“A rate increase allows us to hire more qualified drivers and keep them, since they’re paid for on a 50-50 basis,” Donohue noted. Customarily, taxi drivers keep their tips and half of the base fare, the other half going to the cab company who owns and maintains their vehicle.

“We’re hiring a lot of new people and paying attention to the quality of service, and less so the price,” Donohue said. “We’re taking a much more corporate approach.”

Most of the commission’s concerns centered on rate shock – less applicable for tourists taking short trips from their hotel to a bar, but more so for those traveling greater distances.

Council President Lloyd Martin recounted elderly customers who come into his 7-Eleven on 125th Street, and use taxis to go to medical appointments in Berlin. Given the distance, their costs may increase sharply.

To that end, Donohue and Mullinix proposed a total fare cap of somewhere between $20 and $30. Further, most cabs will charge less than the metered rate to locals, or during the winter months.

“You always have to run the meter, but that represents the most you can charge,” Donohue said. “You may well have agreed to a flat rate beforehand…the bottom line is that you just have to have pride and you have to be honest about it.”

“A lot of our visitors may not be aware that they can haggle…or that this is a ‘yard sale’ type scenario,” said Councilman Dennis Dare, who said he favored smaller rate increases more often in order to acclimate tourists.

To solicit fares originating in the Town of Ocean City, cabs must possess one of 170 city medallions currently in circulation. Medallions typically sell for around $5,000, of which a 25 percent surcharge goes to the city, as well as a $500 annual renewal fee.

Cabs are also required to be inspected by the Ocean City Police Department annually at a cost of $150.