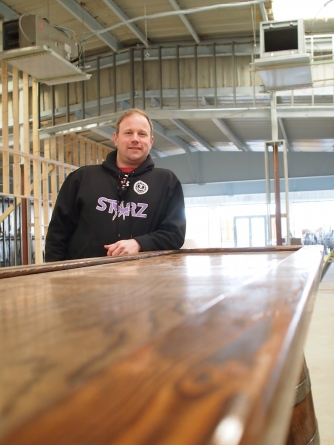 (Feb. 28, 2014) After two months spent ascending to the highest terrace of land use purgatory, the Ocean City Brewing Company is expecting to start its “social experiment” of beer-making before the summer season begins.

“I don’t think anyone’s done this sort of setup in this kind of space before,” said owner Josh Shores. “It’s a social experiment, and a lot of it comes from these tables.”

The tables – about a dozen of them, maybe 20 feet long – are made from wood recycled from The Adkins Company, the hardware store and lumber yard which occupied the 56th Street space until a few years ago.

Each is mounted atop kegs, standing waist-high, optimal for pulling up a bar stool or just leaning against the beams with one’s beer.

“We want this to be a place where you meet new people,” said general manager Thom Lord, a veteran of decades in the resort bar business. “This isn’t the kind of place where you sit and stay in one spot the whole night.”

Creating an intimate, pub atmosphere in such a cavernous space – 8,000 square feet in the publicly-accessible area – isn’t easy, but Shores and his crew have already gone all-in on making the space, and the brewery, a success.

“A lot of places start small and plan to grow, which can be a great strategy,” Shores said. “But in our case, we’re going full-out at the size we want to be, right from the start.”

That plan, however, hasn’t come without its hazards, particularly the amount of attention the brewery has drawn during the lengthy approval process from the city. Although initial concerns about truck access and traffic flow were resolved, the brewery’s appearance before city council for land use approval resulted in two major restrictions which the company hopes to revisit.

Although initial plans called for a 31-foot grain silo to be placed outside the building at its southwest corner, council mandated that all storage of fresh grain as well as spent malt be kept inside the structure.

Concern had been voiced by the neighboring Maresol Condominium that the structure would be an eyesore, and Councilwoman Margaret Pillas said she feared the external silo would attract rodents or seagulls.

The brewery has said that storing the grain indoors using bins or sacks, instead of a silo system where grain could be transferred via a chute truck, would be messier and more likely to attract pests in a building that already housed other foodstuffs.

Moreover, storing grain inside presents complications with the fire code.

“Obviously that building has to be sprinkled,” said city Fire Marshall David Hartley. “It’s not up to us where they put the grain storage, but it they put it inside, it changes the sprinkler demands. It would be considered an extraordinary hazard rather than an ordinary hazard.”

Simply put, having grain inside the building will necessitate higher-capacity – and more costly – sprinklers.

“When grain is in a dusty form, depending on the mixture of dust and air, it can be highly combustible, flammable, or even somewhat explosive,” Hartley said. “Not that it’s what we would consider a common problem, but it has to be taken into account.”

Because of this, Shores said, the original outside silo design “is the cleanest, safest way of transferring and storing grain.”

In fact, he noted, the idea to have an external silo painted with the company’s logo was given a warm welcome by the city’s Planning and Zoning Commission. It was only after the council’s review that the silo was squashed.

“I think the council made a lot of decisions based on our neighbors’ fear about the size of the operation,” said contractor Chris Lynch, who has constructed several area breweries. “But now that we actually have to implement them, they seem pretty counter-intuitive.”

The council’s mandate that the brewery not conduct and canning or bottling, and be limited to growlers and kegs, is also of similar concern. A canning machine is roughly the size of a dumpster, and would create negligible additional noise, Shores said.

“If we had to send beer off-site to be canned, it would create even more traffic,” he noted. “There’s no reason to ban canning and bottling other than to make it more difficult for us to do business.”

“We would really like to go back to the council and intelligently propose the canning as well as the grain storage,” Lynch said.

The brewery’s counter-arguments were not voiced at the council hearing, since the informational record from the Planning and Zoning Commission had already been closed.

“The council is supposed to make a decision based on the record of the planning commission,” explained Matt Margotta, the city’s Director of Planning and Community Development. “That’s where the back-and-forth is supposed to happen.”

However, Margotta said, he fully supported the brewery’s right to ask the issue be revisited. But in order to allow the brewery to request a revision of the council’s conditions, he said, the record may have to be re-opened.

“We may need to do that depending on the level of change we’re looking at,” Margotta said. “If the council did ask for the brewery to speak to the record, then anybody could speak, since this is a quasi-judicial process.”

If so, there would likely be further opposition to the project. Attorney John Seipp had requested to speak on behalf of the Maresol Condominium at the final site plan approval, but was similarly told by the Planning and Zoning Commission that the record regarding land use had already been closed and decided on by the city council.

Yet, with their operation nearly in the clear, the brewery has continued to forge forward with its massive investment. Tanks for brewing, fermenting, and serving are being shipped in from overseas manufacturers – as of last week, a few were even stuck on the Panama Canal.

“We’re not sure what the issue was, but the boat was held up for ten days,” Shores said.

Instead of buying kegs piecemeal or having them come and go from another distributor, the brewery has also invested in hundreds of brand-new kegs to be stored on-premise, complete with “OC Brewing Company” embossed on their rims.

“They’re not cheap and they tend to disappear sometimes, so this marks them as ours,” Lord said. “It’s worth the investment. We plan to be here for a while.”

The bottom line, Shores said, is that he wants the operation to be as self-contained as possible to be less of a nuisance and more sustainable. HIs company has a ten-year lease on the Adkins building.

“We’re in this for the long haul,” Shores said. “We want this place to be an asset to the community.”