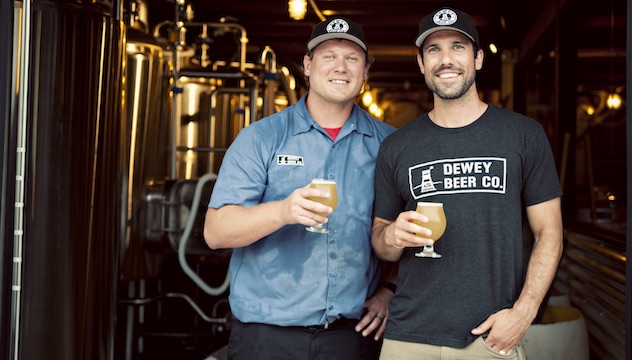 In the run up to the new year (or to the end of 2015, as you like it), the brewing business on the Delmarva Peninsula is getting stronger daily. Brewers are getting together, even while they have some fun competition among one another. In this week’s news we have another brewery crossing the Chesapeake Bay Bridge Tunnel, (or as I like to call it the bridge, tunnel, bridge, tunnel, bridge), several crossing the Chesapeake Bay Bridge and even more working together to expand the culture here at home.

Congratulations to Evolution Craft Brewing for being the first of the breweries to begin competing for the Best of Ocean City award. Sponsored by us here at OceanCity.com the honor is open to all of the local businesses.

EVO Fans we are in the running for Best Brewery for Best of Ocean City awards. We thank you for your support! Cheers!

OC Brewing had its big debut on the other side of the bridge in Abingdon. It is the first regional brewery to pursue operations over the Bay, but certainly not the last!

Had a blast at paint night! I’m no artist but not too bad for my first time. Lol

Assawoman Bay Brewing Company heads across the (other) bay this week to stake its claim in Virginia Beach with a tap takeover this Friday (Dec. 4). Of course, they’ll be on tap beyond then, but this is a great opportunity for our frienemies in Va. Beach to sample some of the best beer we have to offer.

All of the local breweries have great merch that makes great gifts, but here are some that leaped out at us:

Cyber Monday is for beer as well

NEY YEARS EVE KEG DROP — CYBER MONDAY SALE! Want the excitement of the city, without the mayhem of Dewey Beach? Our NYE…

Do you have dinner plans for this evening? Well now you can!

This weeks Dine at Dewey menu is based on Charleston, South Carolina.

Sam Calagione from Dogfish Head was in Berlin this week working with Bryan and the guys on a collaboration brew. The pair also swung downtown and had lunch at the Blacksmith in Berlin. Of course they took their bikes…

Tall Tales will be featured on Television this week, make sure to check them out.

Our most beautiful brewery employee!! OK for a little bit anyway… A big thank you to Michelle from WMDT 47 Commercial…