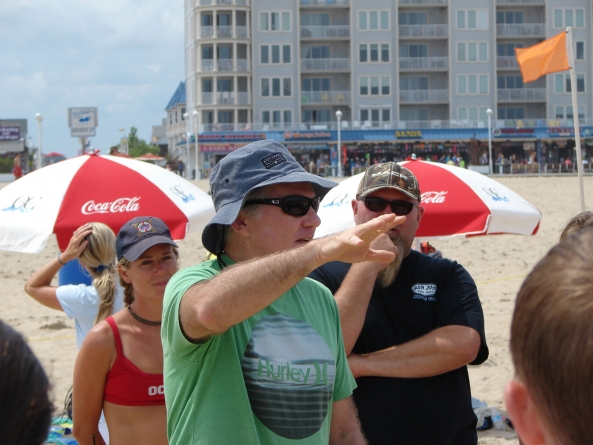 (July 18, 2014) Given the conditions so far this summer, beachgoers in Ocean City might best relate their safety while swimming to the old adage about heights – it’s not the fall that kills you, it’s the abrupt stop at the end.

“It’s the panic that drowns people, not the rip currents,” said Dr. Rob Brander, an Australian expert who has written extensively on the subject under the nom-de-guerre “Dr. Rip.”

“In the long run, rips kill more people than floods, hurricanes, and sharks combined,” said Brander, “but those are the three things that people talk about in terms of coastal deaths, at least in Australia, because they’re sensational or because they kill several people at once.”

But in Ocean City, at least, the lethality of rip currents is a major public topic following two separate daytime drowning incidents last month. Exceedingly rare, the last death during on-duty hours of lifeguards was in 2007.

“Ocean City in particular is really proactive with rip education, and really hands-on,” Brander said. “They educate the public directly, and they also collect a lot of data.”

Through his position as a professor of coastal geomorphology at the University of New South Wales, Brander has been able to accumulate and analyze a great amount of data worldwide on the phenomenon of rip currents.

“You can get rips all around the world, and they’re all the same,” Brander said.

Rips typically occur in rough surf, when waves bring a large volume of water onto shore. That water must flow back out to sea – but does not do so evenly along any given length of coastline. The more concentrated areas of backflow pull swimmers into the flow of deeper water and away from shore.

The prevalence of rips is highly variable from day-to-day and year-to-year, depending on surf conditions.

“It really hinges on the weather, tide, and wind direction,” said OCBP Captain Butch Arbin. “It’s hard to call us a ‘good’ or ‘bad’ area for rip currents. Last summer it was extremely calm – pretty much ‘Lake Ocean City.’ But over a span of years it averages out.”

Even thought the frequency may change, the scenario is almost always the same – a person with little to no swimming ability thinks they are safe in waist-deep water, but is pulled out by a rip current. Instead of concentrating their energies on staying afloat until a guard can come get them, they try to fight the current and get back to shore, which only tires them and makes them sink faster.

“The vast majority of drowning victims are because they’re non-swimmers who get pulled into water over their heads,” Arbin said.

This was the case in the two deaths earlier this year, both of which Arbin described as the confluence of events most feared by guards – while trying to fight the rip, the victim was struck from behind by a wave, and did not resurface.

“In both cases, a wave broke over them and they didn’t come back up,” Arbin said. “People who get into trouble almost always end up facing shore, which actually puts them in greater danger.”

“When you see someone struggling, and they’re allowing the waves to hit them in the back of their head, that’s when you know they’re in danger,” said OCBP instructor Liz Vander Clute.

The OCBP’s mission has always placed as much emphasis on education and prevention as it does on physical intervention, Arbin noted, which is why the force devotes considerable resources to hands-on instruction. Each section of beach has a rotating crew member whose job is to relieve others, allowing them time to get off the stand and interact with the crowd.

The OCBP encourages every visitor to check in with a nearby guard for advice on where rips may be, and where it is safest to swim.

“We want them talking to the guards and we want the families involved to teach their kids,” Arbin said. “We’ve done a lot to incorporate the guards into the beach environment.”

Additionally, large groups are encouraged to contact the OCBP so that they can be given a water safety class by a dedicated guard – such as the one Vander Clute was giving to a church group during Brander’s visit.

“Anywhere where you have a large, organized force, you’re going to be much safer,” said Brander, noting that the difficulty the OCBP faces – having an extreme density of people, rather than a lack of guards, is fairly uncommon around the world.

Most beaches outside the Eastern U.S., he noted, are sparsely attended but also sparsely guarded. Australia has 11,000 beaches, only four percent of which are guarded. Of all annual drowning deaths in Australia, 99 percent take place unsupervised.