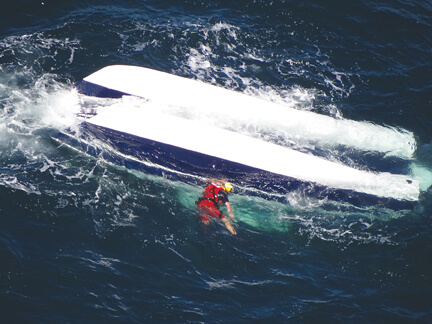 (Aug. 9, 2013) The timing of the city’s annual White Marlin Open – the world’s largest billfish tournament – appears to have been a major boon in rescuing two boaters from their capsized vessel, although two others perished in the incident, according to the Coast Guard.

Around 9 a.m. Monday, the crew of the vessel “Lori M.” reported to the Coast Guard that a 28-foot catamaran had capsized approximately 32 miles offshore to the northeast of Ocean City.

Another vessel, the “Just Right Five,” also arrived on the scene and took aboard two survivors from the catamaran. Their names have not been released, but the Coast Guard identified them both as 55-year-old males.

According to the White Marlin Open’s online roster, vessels named “Lori M.” and “Just Right Five” are participating in the tournament.

Shortly thereafter, according to the Coast Guard, an MH-65 Dolphin helicopter was flown from the Atlantic City, N.J., Coast Guard station to the site. The Coast Guard rescue swimmer aboard the chopper was able to assist one of the crewmembers of the “Lori M.” who was searching for other survivors.

The rescue swimmer and crewmember recovered two other men, ages 53 and 65, who were unresponsive and later pronounced dead, according to the Coast Guard. Their names have not been released.

“Our thoughts and prayers are with the family members and loved ones of those recovered this morning,” Capt. John Little, Commander of Coast Guard Sector Hampton Roads, said in a release. “We sincerely appreciate the efforts of the good Samaritans who acted quickly to report this and assist the Coast Guard in this rescue.”

The Ocean City Fire Department’s rescue dive team responded but was not utilized, according to city Communications Manager Jessica Waters.

The Coast Guard is currently investigating the incident, although no word has been given as to what may have caused the catamaran to capsize.