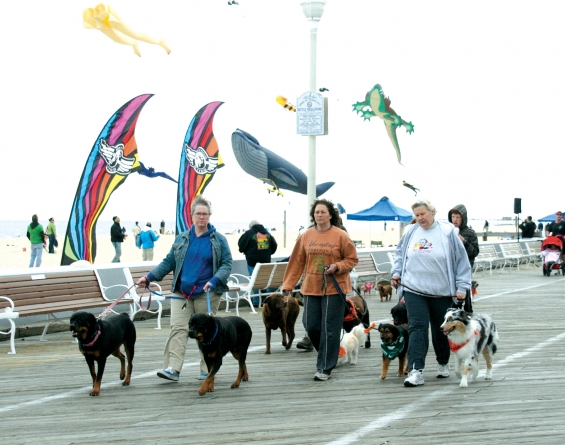 (April 26, 2013) Go for a stroll on the Ocean City Boardwalk this Saturday morning, and take your four-legged friend along for the 14th annual Board Walkin’ for Pets event. Proceeds benefit the Worcester County Humane Society.

“It’s a lot of fun. We hope everyone comes out and supports the humane society,” said Director Kenille Davies.

Registration will take place in front of Harrison’s Harbor Watch restaurant at the southern end of the Boardwalk beginning at 9 a.m. Several contests, hosted by The Wave 97.1, will begin at 9:30 a.m. Prizes will be awarded to the largest and smallest dogs, the canine that performs the top trick, the one who is best dressed and who is the sloppiest kisser.

A special prize will also be presented to the dog that most resembles its human owner.

Although the walk is for dogs, felines won’t be left out. Owners may submit a picture of their cat for the seventh annual Cutest Cat Photo Contest. The winner will receive a gift basket. Photos will not be returned.

Following the contests, owners and their dogs will be free to walk as far as they want on the Boardwalk. Refreshment stops with drinks and snacks will be set up for dogs and owners near 12th and 27th streets. The walk will take place rain or shine.

The person who collects the most donations will win the grand prize gift basket filled with goodies donated by local businesses. Additional prizes will also be given away to some of the highest pledge earners.

The youngest walker who collects the most pledges will also take home a gift basket.

Approximately 200 people registered to walk a dog during the 2012 Board Walkin’ for Pets fundraiser, helping to raise about $26,000 for the shelter, Davies said.

Board Walkin’ for Pets is the shelter’s largest fundraiser annually.

Funds generated during the walk go toward the general costs of running the no-kill nonprofit shelter, located at 12330 Eagles Nest Road, off Route 611 in West Ocean City. Those expenses include food bills, cat litter, veterinary care such as spaying or neutering, vaccines, heartworm and flea preventive, medicines, shots, cleaning supplies and maintenance. Approximately $80,000 is spent annually on veterinary costs and about $700 weekly on pet food, Davies.

Donations such as dog and cat food, treats, toys, crates, blankets, small bedding and cleaning supplies will also be collected for shelter use during the event.

At this time, there are approximately 45 dogs and 125 cats that call the shelter home.

Pups who have been adopted from the humane society can sport “former shelter dog” tags while they walk.

“We have a lot of former shelter dogs walking each year,” Davies said. “It’s nice for us to see them.”

For more information, call the shelter at 410-213-0146 or visit www.worcestercountyhumanesociety.com or search “Worcester County Humane Society” on Facebook.