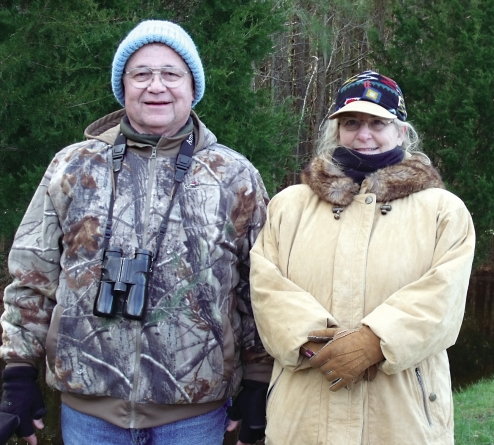 (Jan. 4, 2013) Bundled up against the cold, three intrepid birders scanned the horizon at the Ocean City inlet for hours last Friday as they looked for birds of any kind.

They and approximately 40 others were participating in the 113th annual Audubon Christmas Bird Count in northern Worcester County, held to assess the health of the bird population and to help guide action to conserve them.

One of the sightings in the ocean at the inlet was “big, black and white. We could not identify it,” said Sharyn O’Hare, a member of the Ocean Pines Board of Directors, who was with longtime birders Joe Jehl, a research associate at the Smithsonian Institution, and Doug Gill, a former biology professor at the University of Maryland. “It turned out to be a decoy.”

That was the humorous part of the day. The saddest part of the day was when they saw a black-backed gull eating a dovekie, a small sea bird of the Artic and northern Atlantic Ocean that is rarely seen in this area.

A dovekie on the rocks at the inlet was the highlight of the 2008 Christmas Bird Count and it was O’Hare, a beginning birder at the time, who spotted it first. It was only the second time that a dovekie had been seen during a Christmas Bird Count since 1948, when the Maryland Ornithological Society began sponsoring the state’s count.

That spotting was joyous, but last week’s sighting of the dovekie was very disturbing.

“It was terrible,” O’Hare said. “And very bloody.”

“We hadn’t seen a Cooper’s hawk here before,” O’Hare said.

Other birders were at various places in a 176-square-mile area from outside Berlin to Ocean City, South Point and Assateague Island. Organizer Jay Sheppard, a retired U.S. Fish and Wildlife official from Laurel, Md., spent part of the day searching for birds on properties along Keyser Point Road in West Ocean City with fellow birder Susan Lawrence.

“There’s not as many as we were hoping for,” said Sheppard, who had started his search for birds at 5:30 a.m. “It’s sort of quiet.”

Some of the birds, he surmised, “could be at the other end of the loblollies.”

He had seen a black-crowed night heron, but was hoping to see wild turkeys. Another birder had seen more than 25 turkeys near Assateague. The first turkey seen during one of the Christmas Bird Counts was about 20 years ago. Since then, “they’ve just mushroomed,” Sheppard said.

Sheppard had also been birding the day before and had seen a pine siskin, a tiny nomadic finch from Canada, that is uncommon in this area. He also had another interesting sighting, but not of birds. He said he saw some seals on the rocks at the inlet.