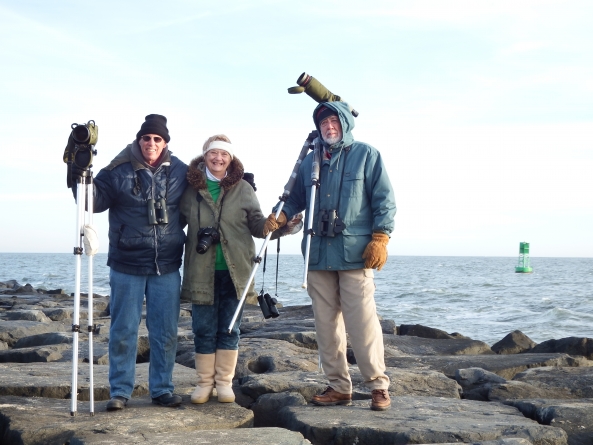 (Jan. 3, 2014) Some birders participating in the annual Christmas Bird Count on Saturday saw the elusive white snowy owl for the first time in the count’s 65-year history.

A snowy owl had been spotted on Assateague Island during the past few weeks. One had been seen in the off-road vehicle area, but on Saturday, the birders saw one farther up the island toward Ocean City, said Jay Sheppard, organizer of the event.

Another first sighting was of the western tanager, which was seen at Deer Run Golf Course on Logtown Road just south of Route 50 a few miles west of Berlin.

Sheppard also reported the sighting of a western kingbird southeast of Berlin. That was the third sighting for that bird and the first since 1977. Other noteworthy sightings included a female immature yellow-headed blackbird, a red-breasted nuthatch and a clay-colored sparrow that was seen flying with a large flock of chipping sparrows.

Sheppard also noted the sighting of a male Eurasion Widgeon on a private pond south of West Ocean City not far from the Assateague Island National Seashore visitors center. For those interested in seeing it, Sheppard said it might move to more public-accessible ponds in that area late this week or next week.

Also of interest were the sightings of two single cacklings, three Ross’ geese, a red knot and at white pelican. A grasshopper sparrow was found in the weedy field behind Home Depot off Route 50. That bird is of particular interest to birder Doug Gill, a former biology professor at the University of Maryland and an expert on that bird.

At the inlet, Gill and Joe Jehl, a research associate at the Smithsonian Institution, were discouraged that they were seeing fewer birds than in past years. Both theorized that boat traffic and far more people on the beach might have contributed to the low number of birds in the area.

Usually during the count, many gulls are west of the Oceanic Motel, which is at the inlet. That was not the case on Saturday.

They did see a sanderling, a bird that usually spends the winter months in South America, three harlequin ducks, 11 common eiders.

The most plentiful sighting was of northern gannets. Looking through their scopes, they saw thousands of them diving on the horizon as they made their way south.

They also saw a flock of scoters flying north.

“It’s sort of a two-way street today,” he said.

Overall, the birders counted 149 species during the bird count, which is held to assess the health of the bird population and to help guide action to conserve them.

Approximately 45 to 50 observers participated in the bird count in its 15-mile diameter area, which is centered about a half-mile southeast of Berlin, was divided up into 10 areas.