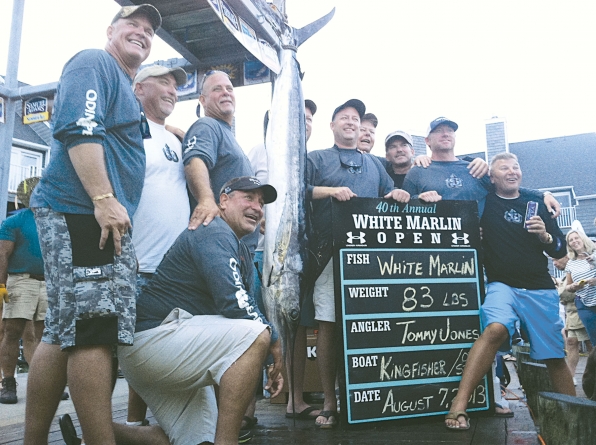 (Aug. 1, 2014) The excitement is building as boat captains, their crews and spectators anticipate the start of the 2014 White Marlin Open. Competition will begin Monday and continue through Friday, Aug. 8.

Jim Motsko, co-director and founder of the tournament, said early registration compared to 2013 is slightly up. Though most anglers wait until the final days to register so they can keep an eye on the forecast, Motsko said about 65 percent of the boats traditionally return to compete each year. Approximately half of the time they are with the same crews.

Final registration will take place at Harbour Island Marina on 14th Street on Saturday, noon to 5 p.m., and Sunday, from noon to 7 p.m. The base entry fee is $1,250 per boat, which makes teams eligible for $50,000 in guaranteed prize money. There is no limit to the number of anglers on each boat.

There are 18 added entry divisions this year, which range in cost from $50 to $5,000 to enter. An overwhelming majority, about 98 percent, of the teams sign up for at least one calcutta, or wagering pool. The more calcuttas entered, the greater the possible return.

To enter every pool (16) this year for boats 37 feet LOA (length overall) and larger, costs $15,950, not including the base entry fee. For boats 36 feet LOA and smaller, the cost is $17,950 to enter into all 18 added entry levels/calcuttas. There are two additional calcuttas for boats 36 feet LOA and smaller: Level SBW: Small Boat Heaviest White Marlin Winner Take All and Level SBT: Small Boat Heaviest Tuna Winner Take All.

Motsko said as the economy has improved, each year teams spend a little more money. In 2013, the average spent per boat was about $10,000.

It takes a combination of luck and skill to catch a white marlin. First, captains and anglers have to know how to find them. From that point on, there is a fair amount of luck involved in whose bait draws the interest of a big fish. Anyone can get lucky and that is why the Open is so popular. Novice anglers have won the tournament.

Teams may fish anywhere within 100 nautical miles of the Ocean City inlet sea buoy, but certain areas hold favor. Most boats will head to the Poor Man’s, Baltimore, Norfolk and Washington canyons, where large fish and Open winners have been caught in the past.

Marlin conservation is emphasized every year, as more than 90 percent of white and blue marlin are released.

Motsko said to win money in the white marlin division this year, fish will have to weigh at least 80 pounds. The tournament minimum is 70 pounds and 67 inches.

“Fishing is just starting to get good for marlin now,” Motsko said last Friday. A number have been hooked just south of Ocean City and Motsko said “if they move up a little bit, we could have some really good fishing.”

To have a chance at prize money in the blue marlin division, Motsko said, fish will have to weigh at least 600 pounds. The tournament minimum is 500 pounds and 105 inches.

Hearing about marlin activity south of Ocean City, Motsko said “I think we’ll see a couple blues qualify this year. I just have a good feeling.”

Each boat is eligible to fish three of the five tournament days. Boats can leave from any inlet between Rudee Inlet, Va. and Barnegat, N.J.

All anglers will be searching for the same species: white and blue marlin, tuna, wahoo, dolphin (mahi) and shark. While the white marlin division is the most coveted, there are also large payouts in the blue marlin and tuna categories. Cash prizes are also awarded for billfish releases.

Motsko said the estimated payout to the 2014 winners could be more than $2.5 million, depending on participation. Weigh-ins will take place daily at Harbour Island from 4-9:15 p.m. and are open and free to the public.

The first White Marlin Open took place in 1974 with 57 boats registered and a guaranteed $20,000 in prize money. Last year, approximately 2,000 anglers on 262 boats headed offshore. Overall prize money paid out to the winners last year was about $2.47 million.

Several qualifying marlin were brought to the Harbour Island Marina scale last year, and after five days of fishing, an 83-pound white held the top spot in the coveted division.

Just before 8 p.m. on Day 3, the OdinSpear arrived at the 14th Street scale with Tommy Jones’ white marlin on board. As the numbers on the scale rose, the cheers from the crowd grew louder. The scale stopped at 83 pounds and the fish took over first place.

Based on the crew’s estimations, they thought the marlin would be in the high 70-pound range. Needless to say, they were beyond thrilled it weighed in at 83 pounds.

“The fish was pretty big in its girth…fortunately we had a fat fish so it worked out great in our favor,” Jones said.

He fought the marlin for about 40 minutes.

“The fish fought hard and I knew it was a big fish,” the Severna Park resident said. “He took a couple runs, but fortunately we were finally able to get him on the boat.”

Jones and his Kingfisher teammates fished on the OdinSpear during the tournament because the Kingfisher had some mechanical difficulties. Jones has been competing in the White Marlin Open for more than 20 years. He won third place in 2010 for an 80.5-pound white marlin.

Approximately $714,000 of that came from the Level E Winner Take All for heaviest white marlin calcutta. Fifty-eight percent of the 262 boats that participated in the tournament signed up for that added entry level which costs $5,000 to enter.

Before Jones’ marlin was weighed, three 77-pound whites were tied for first place.

Jeremy Duffie landed the first 77-pound marlin a day earlier aboard Billfisher. The other two were boated on Day 3 by Debbie McCann (Sea Mistress) and Larry McKinley (Sea Toy).

According to tiebreaker rules, anglers who do not use a gaff (a pole with a sharp hook on the end that is used to stab a large fish and then lift it into the boat) is declared the winner. A gaff was not used to get McCann’s and McKinley’s marlin onto their respective boats. It was used on Duffie’s fish.

The rule was implemented years ago when there was a rumor that anglers were gaffing fish, bringing them on board and if they were too small they were throwing the marlin back into the water.

On Day 4 of the 2013 tournament, Richard Kornahrens landed a 77-pound white aboard Lights Out. The fish was not gaffed.

McCann’s, McKinley’s and Kornahrens’ fish ended in a three-way tie for second place. It is the first time that has happened during the tournament. The teams each received a check for $102,498.13.

Marlin conservation is emphasized every year. During the 2013 competition, 376 white marlin were released, while 18 were boated (95.43 percent). Six sailfish and two spearfish were also released last year.

Anglers released 42 blue marlin and only one was boated (97.67 percent). It did not meet the tournament minimum 500 pounds.

The prize money in the A, B, C, D (three heaviest white and blue marlin) added entry level calcutta went into the white marlin division because no blues qualified. The Level F “Winner take all” pot for heaviest blue marlin–$212,910– went to the angler who landed the first place tuna.

The tuna division was action packed throughout the 2013 competition.

“The bigeye showed up and kept things interesting,” Motsko said after last year’s WMO. “That gave a whole new element to the tournament we never had before.”

James Czaban took over first place on the final fishing day, with a 276-pound bigeye. He and his Sushi teammates won $573,850.83–a tournament record. Miss Annie angler Mark Donohue finished in second place with a 261.5-pound bigeye. The payout for the fish was $65,120.83.

The Ocean Dan-Sar’s John Coleman won $46,060 for his 148.5-pound tuna for participation in the small boat (36 feet and smaller) calcutta.

Why Knot angler Jeff Collins won the dolphin division with a 34 pounder. It was worth $14,726.33. Bill Gerlach’s 33 pounder he landed on Billfisher finished in second place and earned the team $3,433.33.