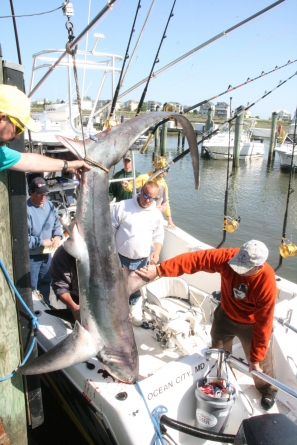 “I think it was a move in the right direction,” said Mark Sampson, co-director of the tournament.

Comments from participants about the date change and the streamlined tournament format were positive, Sampson said.

Eighteen boats registered for the 34th annual Ocean City Shark Tournament. Teams could fish two of three tournament days. Because of poor conditions, no boats went out last Thursday so all 18 were eligible to fish Friday and Saturday.

Sean Hogan of Morganville, N.J. was the first to weigh a fish at the Ocean City Fishing Center in West Ocean City, last Friday. He landed a 314-pound mako aboard Sweetie to take top honors in the division. The fish was worth $10,170.

Nate Leader of Sudlerville, Md. finished in second place in the mako division with a 193 pounder he reeled in aboard Keep ‘Er Wet. He received $6,660.

First place in the open division when to Blake McGrath of Ocean City for the 346-pound thresher he caught on the Reel Instigator. Teammate Bob Sawyer of Port Deposit, Md. hooked a 148-pound blue shark. The crew was awarded $5,850.

Ricky DeWitt of Masontown, WVa. landed a 132-pound blue shark aboard the Restless Lady and won $972.

Parsonsburg, Md. resident, Mike Ennis, was presented a check for $648 for his 131-pound blue shark caught aboard Intimidator.

There were no entries in the bluefish division.

The Nontypical crew released four makos, nine sandbar sharks and 13 blues to finished first in the division.  The team was awarded $8,226.

Thirteen-year-old Evan Carmen landed a 142-pound blue shark on All Hooked Up. The fish put him in first place in the youth division. He pocketed $500 for the catch.

Eleven-year-old Noah Morris released one blue shark while fishing on Intimidator. He was presented with a rod and reel.

One hundred and eight sharks were released–13 makos, 85 blues and nine sandbar.

“Moving the tournament up (from mid-June to the end of May), we only saw four types of sharks. In mid-June you see more variety of sharks because the water is warmer,” Sampson said. “Blue sharks dominated the catches.”

“Everything went very smoothly. It went well for those who participated,” Sampson said. “With 18 boats, we had a good number of fish coming in. I was  kind of surprised by that. Everybody seemed to catch fish. To coin the phrase, ‘a good time was had by all.’”