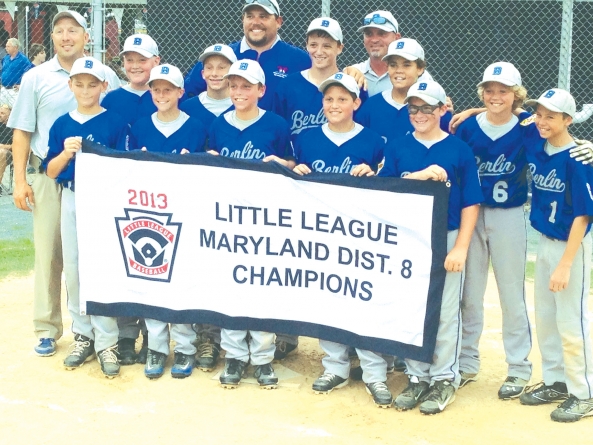 The Major League team will travel to Arbutus in Baltimore County, to compete in the state championship. If Berlin can hold their own, they’ll advance to the Mid-Atlantic Regional Championship in Connecticut a week later.

If the team wins the regional title, Berlin will compete in the Little League World Series in Williamsport, Pa., which begins Aug. 15.

“Our best feature is our depth of pitching, hitting and defense,” said Manager Cameron McDonough. “Other teams can’t match up with the depth of talent we have.”

Berlin went up against West Salisbury on July 10, in the District 8 championship and won 6-2.

“It was definitely a nail-biter,” said McDonough. “We knew that going in. It was a tough one and it was real tight.”

The game was scoreless after two innings until Tristan McDonough scored to give Berlin a 1-0 lead in the bottom of the third.

“After the fourth inning I told them they’re going into deep water,” the manager said. “[Berlin had] been there before but West Salisbury hadn’t.”

Berlin committed two errors in the top of the fourth and West Salisbury capitalized. The squad scored two runs to pull ahead 2-1.

In the bottom of the fifth, Ryan Duncan was successful at stealing home to tied the game at 2-all.

Tristan McDonough hit a double and drove in Hayden Snelsire and Billy Wheatley and Matt Kinsey both had a single. Wes Powell hit a base-clearing double.

Berlin scored four runs in the bottom of the fifth and held on the win the six-inning game 6-2.

“There has been a lot of tough [situations] playing together and we’ve played tough teams,” said McDonough. “All of the boys knew very well this was going to be the hardest game of the season and it was. But we pulled it together.”

The Major League team will advance to the state championship, which begins Saturday and McDonough said he is looking forward to the double elimination format. The team will have to lose two games to be eliminated and he said the boys are stronger in that format.

Berlin’s first game is against Bethesda (District 7 champs) on Saturday at 6:30 p.m.

The team of 11 boys and their families pay for the entire trip, including hotel rooms, T-shirts, transportation and food for up to five nights. In 2011, the team incurred more than $20,000 of expenses during its two months of competition. Snelsire said Berlin is still looking for local sponsorship.

To make a tax-deductable donation to the Berlin Little League All-Star 11-12-year-old team, contact Wheatley at 443-614-3225 or e-mail berlinmdlittleleague@gmail.com.

To follow the team during its state championship run, visit www.gamechanger.io.