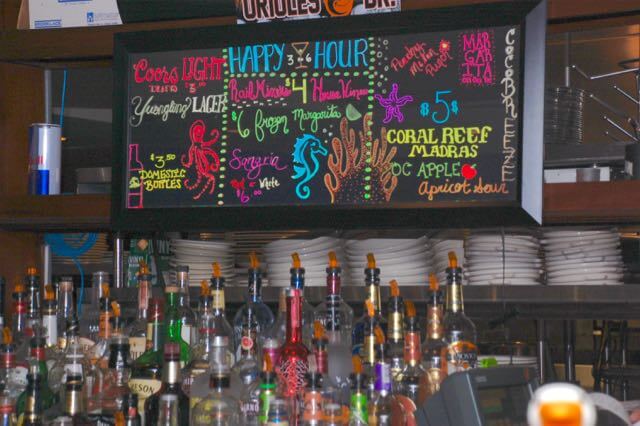 I make no apologies for the following fact: between my day job and my general disposition I spend a lot of time in bars. There is a great scene in the (future) movie classic Silverado wherein one character asks another, “Do you like a good saloon?”

And I do in a big way. That’s what makes me want to talk about bartenders. There are several kinds, and in the resort every possible type are represented. My second favorite is the bartender who has to feign honesty because he or she respects her position. Bartenders operate outside of the regular constraints of normal service people, because different things are expected of them. They can curse or tell bawdy stories if they like. They can roll their eyes at the management or the rules, generally. Hell, they can openly hate the local sports teams, because they are (for better or worse) temporary good friends.

Running the show at the bar at the Holiday Inn Oceanfront

A good friend won’t add more varnish than is needed to a solicited opinion, and only a little varnish to an unsolicited one. The second best bartenders play this part. They slip into the roll of good friend as a roll. My working theory is that this is only possible for a bartender in their 30s or older. They don’t have to be cynical, but they have to be credible. Credibility comes from being able to parse the space between forthright and honest.

The best bartenders are like method actors. They don’t assume a persona, they adopt one. Patrick at Hemingway’s at the Coral Reef Cafe, the bar in the Holiday Inn Oceanfront, is that kind of bartender. He isn’t world-weary but neither is he naive. Instead he is open and honest and capable of having whatever conversation you throw at him, and watching him work was something between entertainment and education.

Winter is quiet and that is OK

There weren’t a lot of people at the bar when I swung by. It was, after all, the week before Christmas in a beach town. The Holiday Inn, Oceanfront, however, is a real full service hotel. For many if not most travelers, that means it has a bar and that the bar mostly is open. The hotel makes this investment because it improves the guest experience immensely, especially in the slow times, to have access to a bar. You feel a little less alone, even though you might not strike up a conversation with the people there, it is so much better than sitting in your room waiting for it to be late enough to go to sleep.

Patrick checked on the guest drinks as we spoke, but he did so with a professional furtiveness that I wish I could produce a serum for. Sometimes you’re at a bar and the bartender comes over to check on you. In many of these cases, the interaction is so forced and obligatory as to be uncomfortable.

He might as well say, “I’m asking how you are doing because if I don’t I’m afraid you might think I’m ignoring you.”

To which you might respond, “If there’s liquid in my glass and food in front of me, we don’t need to chat right now.”

Patrick seemed to have the room read perfectly. For example, there was one young lady who was enjoying some wings, sipping her drink and alternating between reading and texting. He would watch her glass, and when it looked as if it was getting too empty, he would pop over. It only happened once. She, like several of the other people I noticed, apparently wanted the noise and the proximity more than the alcohol or conversation.

A good sense of things

Patrick talked about his travels. Like so many of the people who remain employed in Ocean City through the winter, he has been a professional bartender, or worked in a restaurant in some capacity, for much of his professional life. He raised a family and occasionally indulges in mad travel. He was relating a story about concert going, he had taken his son to London for a concert for the boy’s 18th birthday, and was relating a particularly complex story when a clock of some sort went off in his head. He turned to see one of the waitresses heading his way.

She needed a not-uncomplex drink made, a peppermint martini, and he was happy to oblige. He shook it up for her, garnished it gently with a candy cane and sent the young lady on her way. He scanned the bar, picked up a disused plate, refilled a drink and returned to his story. He never missed a beat, but that appears to be the way he operates.