The Baltimore Sun reports that Hurricane Sandy has weakened overnight, but is still targeting the East Coast and will have impact in Maryland.   The current predicted landfall location is New Jersey with the worst flooding north and east of the landfall.  That’s good news for Annapolis and Ocean City residents.  All officials, however, recommend that people prepare adequately for the storm since massive power outages are predicted.  Scott Dance’s story from the Baltimore Sun is attached below. 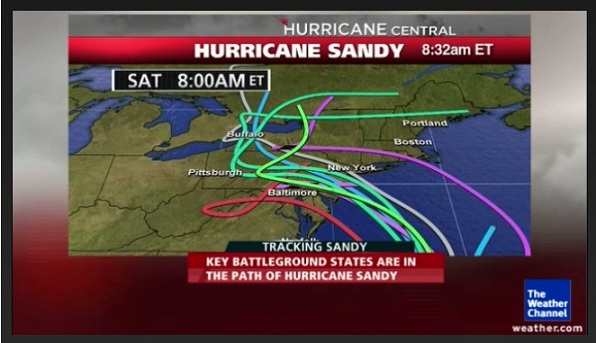 To read the story in the Baltimore Sun, click here

Sandy weakened to tropical storm strength overnight but had at least briefly returned to hurricane strength by 8 a.m., with maximum sustained winds of 75 mph. Forecasters warn it could still have a significant impact up and down the East Coast.

That includes possible flooding across Maryland. The National Weather Service issued a flood watch for central and eastern parts of Maryland, with Sandy expected to make landfall somewhere between the Delmarva peninsula and northern New Jersey. That could bring 3-5 inches of rain to the Interstate 95 corridor in Maryland, according to the weather service.

The projected track is shifted slightly north from what the National Hurricane Center had been forecasting earlier, potentially sparing Maryland of a direct hit. The storm is forecast to weaken to a tropical storm again but regain hurricane strength early Monday before making landfall.

Forecasters urge East Coast residents not to take the storm lightly because its strength has downgraded, though. Tropical storm force winds of at least 39 mph extend 450 miles from the center of the storm, meaning Maryland could be subject to heavy winds for two days or more starting late Sunday.

Have a weather question? E-mail me at sdance@baltsun.com or tweet to @MdWeather.