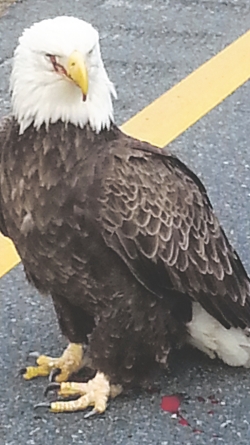 (Jan. 30, 2015) A bald eagle was clipped by a passing motorist on Route 50, Sunday, Jan. 25, stunning and inflicting apparently minor injuries on the raptor, before Department of Natural Resources officers released it later the same day.

“I saw it get hit by the car and I was sure it was stunned,” he said, “I’m a first responder for marine animal recovery with the National Aquarium.”

Those skills, Reinhart said, aren’t completely transferable to avian rescue, but he knew enough to keep his, and all of the other onlookers, distance. A number of bystanders also stopped, according to Reinhart, and attempted to divert traffic around the bird.

“The officer threw a blanket over it,” Reinhart said, noting the bird did not take kindly to the safety procedure before the officer removed the animal into his truck.

Multiple sources claim the eagle became agitated while in the DNR vehicle, possibly escaping from the blanket enclosure. The DNR reported releasing the animal from the truck in a nearby field, where it flew into a tree, Thomson said.

The responding officer, disinclined to give chase, returned to the area several hours later to find the eagle had left the area, Thomson said.

“The initial reaction of a person finding an injured animal might be to take it home and attempt to help the animal recover,” Thomson said, “people rarely have that skillset — call an expert.”