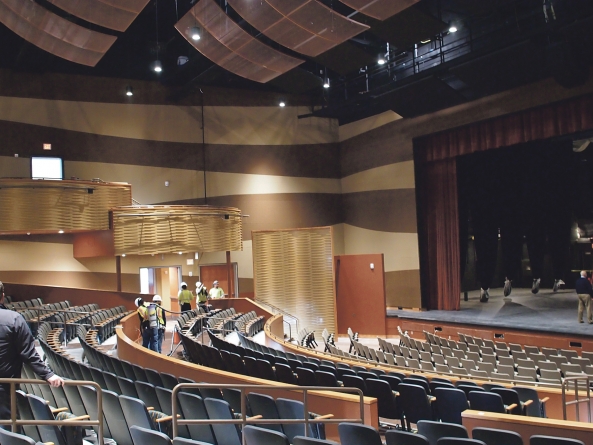 (Dec. 12, 2014) Even if you’d been hiding under a rock for the past year and had no idea that major construction was happening inside the convention center, the smell would still tip you off.

With less than a week to go before the first headline show on Saturday, Dec. 13, the distinct scent of new construction hung heavy in the Ocean City Performing Arts Center.

“I’m excited for people to finally see the finished product,” Mayor Rick Meehan said as he led the media on a preview tour of the facility.

“They’re not going to have anticipated the scope of what we’ve done here. It’s impressive.”

Early this week, crews were still working on the finishing details of the space — painting railings, varnishing floors and vacuuming the carpets — in anticipation of Saturday’s inaugural performance of The Texas Tenors.

It’s the small details, Meehan said, that make the difference.

“This is what sets you apart from the competition,” he said. “The little things are what make it a professional-grade space.”

Even a question about the seats begs an invitation to try them out. They’re the kind you could sit in for a three-hour performance without your rear going totally numb. And the folding bottoms don’t slap when you get up.

At 15,000 square feet, 1,216 seats, and more than 50 feet of ceiling headroom, the Performing Arts Center is a cavernous space, at least by Ocean City’s standards. But it’s not so large as to take the audience out of the action on stage, as is the case with many larger auditoriums or amphitheaters.

“There’s not a bad seat in the house,” Meehan said. “This isn’t going to be a mass venue like, say, the Salisbury Civic Center. It’s intended to be a more intimate venue.”

This is the essence of the gamble the city has taken in building the center. The facility is state-of-the-art enough to house nearly any act. But splitting the cost of a big-name performer with only 1,216 patrons could make for higher ticket prices.

“The price point is the controlling factor,” said Convention Center Director Larry Noccolino. “But I think we’re in a good position to be the premier facility on the Eastern Shore. I can’t think of anywhere else that offers what we now have.”

Complicating its mission, the center walks a fine line between attracting new programs while also catering to the convention center’s existing base.

Out of 52 weekends in 2015, roughly half have the center booked by long-time clients such as the Maryland Firemen’s Convention, the Hotel-Motel-Restaurant Association trade show, and the Star Power cheerleading competitions.

“We wanted to create a focal point for new entertainment and an added value for our existing customers,” Meehan said.

As of this week, Noccolino has locked down seven new headline shows for the center, such as the March performance of “Cinderella” by the Ballet Theater of Maryland. This leaves 16-18 dates still open for the coming year, Noccolino estimated.

“We still have tickets left at this point,” Rothermel said. “We’re optimistic about selling out, or coming pretty close, by the night of the show.”

Construction of the center is expected to total $14 million, of which the Maryland Stadium Authority — the city’s operating partner in the convention center — is funding $5.7 million. The city issued a bond for the remaining $8.3 million last year, to be paid back using the town’s food tax income.

A study done in 2010 projected $3.2 to $3.9 million in new spending by visitors in the resort as a result of the performing arts venue. If met, this would result in $200,000 to $240,000 in additional revenue to both the city and state, with what officials hope is limited added expense.

The study also assumed that the center would attract between 61 and 73 performances per year, with total attendance between 45,700 and 55,050. The convention center currently sees roughly 400,000 visitor-days logged each year, the majority from conventions and trade shows.