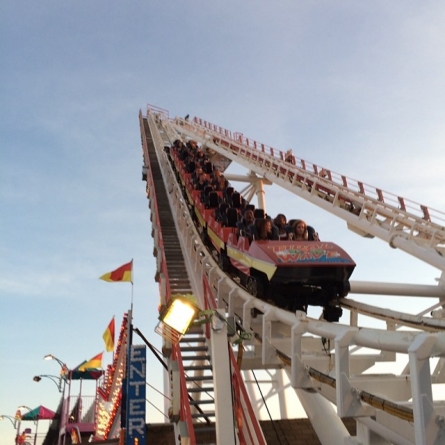 Play It Safe 2014 officially began May 27, with breakfast at Hall’s Restaurant on 60th Street.

“It’s been a very successful 25 years,” Mayor Rick Meehan said during the kick-off event. “To be able to put a program such as this together and maintain it for 25 years is outstanding.”

The first events–tie-dying T-shirts and a pizza-eating contest– got under way a few days later. Activities ran through June 17.

“The numbers have gone down slightly the last couple years,” said Donna Greenwood, chairwoman of the Ocean City Drug and Alcohol Abuse Prevention Committee and a Play It Safe volunteer. “I just don’t think the kids were here.”

Greenwood said the economy might have played into the lower turnout this year as well as the “College Takeover Beach Week” publicized on social media, which was scheduled to take place the first weekend of June. Concerns were that the event would draw thousands of college students. Event participants caused problems in other towns in the past. Ocean City was prepared for the influx of visitors, adding extra police presence. That gathering didn’t happen in Ocean City, or if it did, there were no issues.

A new event added this year was hitting baseballs in the batting cages at Grand Prix Amusements in West Ocean City on June 6.

“The ones who came had a good time,” Greenwood said.

The Blue Ox on 127th Street hosted dance parties June 3,10 and 17 for teens. The first party drew the largest crowd.

“It was a packed house the first week. They danced from start to finish,” Greenwood said. Approximately 200 graduates stopped by the dance party during a two-hour period.

During the different events, participants could also pick up a wristband that allowed them to ride the resort bus free.

“The events went very well. The kids enjoyed themselves,” Greenwood said. “The volunteers commented how polite the kids were. The kids were so appreciative…Everything ran smoothly. Everyone had a good time.”

The Worcester County Health Department and Ocean City Drug and Alcohol Abuse Prevention Committee coordinated the 2014 program with support from the Town of Ocean City, Governor’s Office of Crime Control and Prevention, Maryland Network of Prevention Coordinators and local businesses and organizations.

Greenwood said the program would not be possible without the support of these groups as well as Play It Safe volunteers.

“Volunteers are what drive this whole program. They keep us going,” Greenwood said. “We had so many great volunteers this year.”

The Play It Safe program is an effort to prevent the abuse of alcohol and other drugs by high school-aged visitors to the resort. It is designed to encourage recent high school graduates to make informed, healthy choices while having responsible fun without the use of drugs and alcohol.

Since its inception, approximately 165,000 teenagers have signed up for Play It Safe’s free activities.

For more information about Play It Safe, visit www.playitsafeocean-city.com.