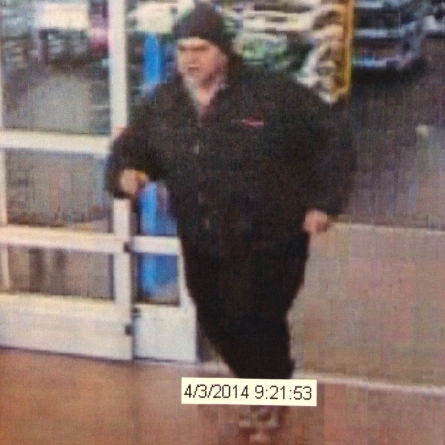 (May 2, 2014) A registered sex offender was charged in Delaware with being the Peeping Tom who held a cell phone camera beneath a bathroom stall door at Walmart and tried to take pictures of the woman inside last month.

At about 9:30 a.m. April 3, state troopers from the Berlin barrack responded to Walmart and learned about the man’s attempt to take the photos. The woman in the stall had seen the man’s hand, holding a cell phone, reach underneath the door. She phone, she told police. Seemed to be taking photographs or creating a video.

The woman immediately pulled up her pants and ran after the suspect. Confronting him, she said she wanted to see the phone to make sure he had not taken pictures of her. The man responded by walking quickly out of the store. He walked toward the Home Depot entrance, where the woman lost sight of him.

Before she lost sight of him, however, she used her own cell phone to take photos of him. She gave those photos to a state trooper, who saw that they showed the suspect to be a white man, approximately 6 feet tall, weighing 275 to 300 pounds and wearing black sweatpants, a brown hoodie or jacket and tennis shoes with a bright orange outsole.

Troopers also obtained Walmart’s video surveillance, which showed the suspect had loitered near the eastern side of the store’s entrance doors. The video showed the victim entering the store and the suspect putting his phone down. Then it shows the suspect following the victim into the bathroom area.

Less than one minute later, the suspect is seen running from the bathroom area, followed by the victim, who is pointing and yelling.

Ten days later, investigators observed additional surveillance video from Walmart. This video showed a man getting out of a tractor-trailer that had backed into a loading spot at Home Depot. The man in this video matched the suspect that had been seen following the victim into the store.

After talking to representatives from the Home Depot shipping and receiving area, investigators were able to identify the suspect as George Toth of Kregeville, Pa. After getting an arrest warrant charging Toth with being a Peeping Tom and prurient interest, the investigators tracked him to the Home Depot in Dover, Del. They contacted the Dover Police Department and Toth was arrested on those charges and an out-of-state fugitive warrant.

Detectives with the Worcester County Bureau of Investigation interviewed Toth in Dover and they also found he was a registered Tier 2 sex offender through the Commonwealth of Pennsylvania.

Toth was taken before a judge in Delaware and was released on $2,000 bond. He is scheduled for a May 23 extradition hearing back to Maryland.