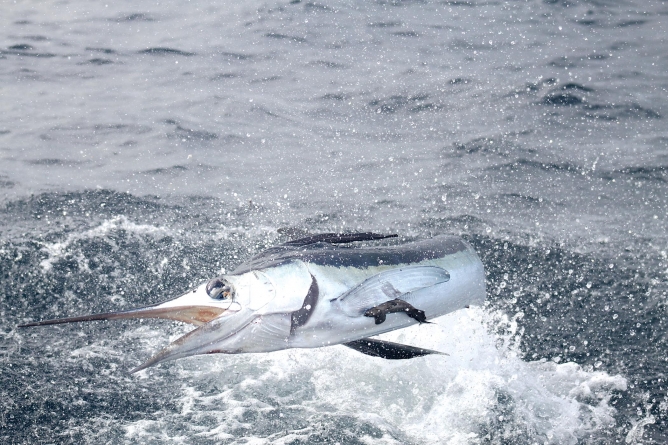 (Aug. 8, 2014) After three days of weigh-ins, at the close of the Harbour Island Marina scale Wednesday night, no qualifying white or blue marlin had been boated during the 41st annual White Marlin Open.

A few whites and one blue were brought to the 14th Street marina, but they either didn’t make the tournament weight or length requirements. A qualifying white must measure 67 inches and weigh 70 pounds. The minimum weight and length for a blue marlin is 500 pounds and 105 inches.

The first-place white marlin could be worth approximately $1.1 million, tournament co-Director Andy Motsko told the large crowd gathered at the marina Wednesday.

At the close of the weigh-ins Wednesday, tournament co-Director Chuck Motsko said after three days of fishing, captains know where the billfish are now.

“My guess, we’ll have some nice fish before it’s over,” he said.

As of Thursday morning, tuna on the leader board were worth about $526,000.

Doug Mazzullo’s (Kent Island) 183.5-pound bigeye he caught Monday aboard Constant Threat was in first place as of Wednesday night. The estimated payout for the fish is $2,000. Because of participation in the added entry level calcuttas, the second-place tuna could bring in $400,000. Mike Kalajain’s (Indialantic, Fla.) 182-pound tuna he caught aboard Plane Simple Monday held the second spot after Day 3.

Pez Machine anglers Greg Melara (Mt. Laurel, N.J.) and Mark Reitter (Wall Township) reeled in 180- and 178-pound tuna Monday. They have the potential to win $98,000 for the two fish if no heavier tuna come to the scale.

Eric Seigel (Aldic, Va.) took over the top spot in the dolphin division Wednesday with the 38 pounder he caught aboard Trophy Hunter. The fish is estimated to be worth $15,600.

Mitchell Hand (Cape May, N.J.) was in the second-place spot as of Thursday morning with the 29.5-pound dolphin he hooked aboard Judge, Tuesday. The fish could earn the crew $14,600.

John Bayliss’ (Manns Harbour, N.C.) 26.5-pound dolphin he boated Tuesday on Dream Time was in third place. The fish could bring in $2,000.

Kenny Lord (Cambridge) reeled in a 66-pound wahoo while fishing on Iceman, Tuesday. It is potentially worth $15,600 (Daily Meatfish Calcutta).

The only shark landed after three days weighed 156 pounds. Spencer Watson (Cape Carteret, N.C.) caught the mako shark aboard Edge Ryder II, Monday. The team could pocket $4,000 if it remains in first place.

A total of 288 boats are entered into the WMO. Crews can fish three of five days. The final day of fishing is today. Weigh-ins are from 4-9:15 p.m. at Harbour Island Marina. 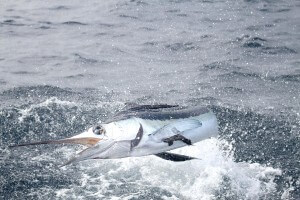