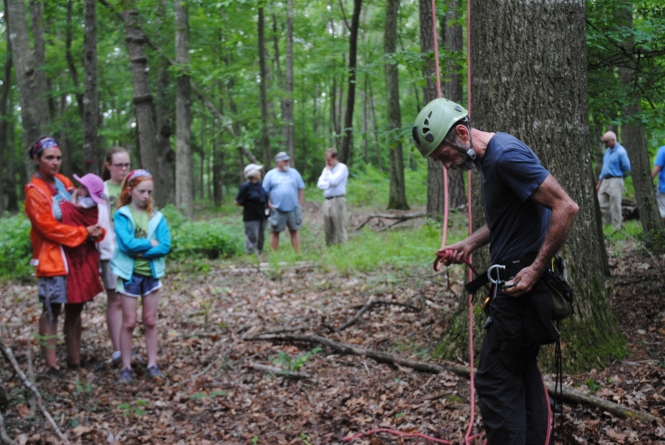 Around 20 attended the dedication ceremony last Wednesday for the swathe that features the 1-mile-long Prothonotary Birding Trail, a sloping tract leading up to the edge of Nassawango Creek and its bald cypress swamp.

“That’s the beauty of it — this is our future old-growth forest,” she said.

What constitutes “old growth” varies by type of tree, but about 100 years old or more works as a general rule, Johnson said. Around that age, trees begin to have a horizontal branch structure — one that proves key for some species.

Birds, including the trail’s namesake Prothonotary Warbler, and some mammals such as squirrels thrive in those dense forest environments and even other plants such as lichens and ferns begin to grow on very old trees.

“Because it’s been there so long, it starts to have its own ecosystem,” Johnson said.

The goal of the Old-Growth Forest Network is to take areas like that and protect them from future logging, said its Founder and Executive Director Joan Maloof.

The Network looks for forests that are “as old as possible” to add to its list of Dedicated Forests, she said. It also requires that dedicated tracts be open to the public so future generations can interact with the environs that had virtually disappeared from the U.S. landscape.

The goal is to eventually have an old-growth forest protected from logging in each county that once had such a forest, Maloof said, and at two years old, the Old-Growth Forest Network already includes 30 such areas spread across the United States.

The Nature Conservancy began collecting land along Nassawango Creek in 1978, according to its Web site. At more than 9,000 acres of swamp and upland forest along the creek, the Nassawango preserve is Maryland’s largest privately owned and protected areas.

It is also one of the northernmost remaining examples of a bald cypress swamp.

Limited core sampling as Nassawango found 150-year-old pines and a bald cypress aged at 183 years, as well as other species over 100 years old — and those might not even be the oldest trees in the protected area, Maloof said.

Now that the land is part of the Old-Growth Forest Network, it will be protected from future logging.

“When this forest was privately owned, it could’ve been cut down,” Maloof said. “It’s a beautiful, mature, diverse forest and now it is protected.”

Those interested in seeing old growth trees along the Prothonotary Birding Trail can find the trailhead on Creek Road in Snow Hill and should come prepared with bug spray.