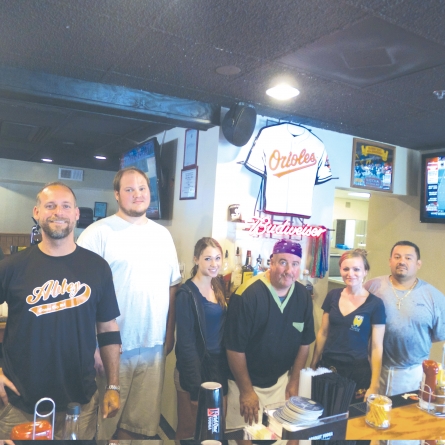 “You won’t get anything like you get here,” owner Eric Leatherman said. “We’re all about quality.”

Abbey Burger starts with beef from Roseda Beef farm in Monkton, a Maryland town north of Baltimore. The Black Angus meat is dry-aged for two weeks before it is brought to the restaurant to be freshly cut and ground in-house.

Abbey Burger offers a range of other less-typical meats for its build-your-own burger menu, from bison and lamb to camel, duck and kangaroo.

“You’re not getting kangaroo anywhere else,” Leatherman said. “It’s just one of the cool things we do.”

As Abbey Burger tries to source its meat locally, it also brings in a host of local beers. Those are on special during happy hour every day, from 4-7 p.m., when domestic bottles cost $2, select drafts, rail drinks and house wines cost $3 and appetizers are half-price.

Abbey Burger opened at its 126th Street location after the owners examined several other locations, Leatherman said. It took over the old Olive Tree building, an institution in Ocean City for more than 50 years.

“I immediately was attracted to the brick façade. And that’s kind of our façade in Baltimore,” Leatherman said.

Renovations before opening included knocking out some walls to open the space, building an outdoor deck and full bar and remodeling the dining room.

The Ocean City menu is almost identical to the menu of Baltimore’s Abbey Burger Bistro, except Ocean City offers a tuna burger to its diners. The prices also stayed the same — roughly $10 a burger.

The only thing that is very different from Abbey Burger’s Baltimore location is the vibe, Leatherman said. The Ocean City restaurant has live music every Tuesday, Thursday, Saturday and Sunday, an outdoor deck and a full-size bar.

In the end, though, it all comes down to quality for Leatherman.

“We could buy patties from Sysco all day long, but that’s not going to give us return business,” he said. “You’re always going to get quality food here, and that’s what brings people back.”

The restaurant dishes up 600 pounds of Black Angus beef each week, if that’s any indicator.

Abbey Burger Bistro on 126th Street bayside is open daily, 11 a.m. to 2 a.m., and the kitchen stays open to 1 a.m. The restaurant plans to run the same hours throughout the winter, Leatherman said.