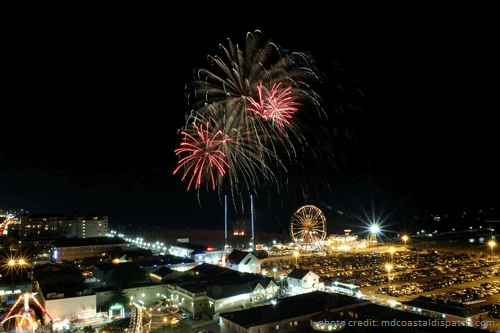 July 4th weekend is always one of the most exciting times to be in Ocean City, Md and this year will be no different. This holiday weekend, there will be activities for all ages and interests- ranging from  fireworks, concerts, and movies on the beach to live bands and good old food and drink specials.

The weekend’s festivities begin a few days early with Ocean City Brewing Company’s Grand Opening Party on Tuesday, July 1. They continue on Thursday the 3rd with a screening of the Pixar classic Monster’s Inc on the beach at Princess Royal Hotel, beginning at 8:30. From 7-9pm there will also be the first of Sunset Park’s Party Nights, featuring a free concert with food and beverages for sale. The park is located bayside on S. Division Street. Simultaneously on Thursday- Seacrets will be having two live performing bands; the Jim Long Band from 5:00-9:00pm and Innasense from 9:00pm-1:00am.

On the big day, Friday the 4th, the activities seem almost endless. The biggest events are of course the fireworks. Fireworks will be shot off from both the beach at N. Division Street and Northside Park at 125th Street. Both of these events will start at 8:00pm with a free concert and fireworks will follow at 9:30. The United States Army Band Downrange will be performing at Northside Park while Frankie & The Pack with Trish Curreri’s Perfectly Patsy will play at N. Division Street.

A variety of restaurants and hotels will also be holding their own fireworks displays, maybe the most spectacular being the display at Seacrets on 49th street. Seacrets will also have three bands performing throughout the day; Jim Long Band from 5-9pm and Innasense from 9pm-1am on the Beach Stage and Lost in Paris from 10pm-2am in Morley Hall.

On Saturday the 5th the party keeps rolling with five bands at Seacrets; 9 Mile Roots, Jim Long Band, Element K, Innasense and Garden State Radio. Additionally there will be Yoga on the Beach at 8am in Assateague Island National Seashore and both the Ocean Pines and the Ocean City “Shore Fresh” Farmerss markets run from 8am-1pm.

On Sunday the 6th the party slows, but doesn’t abate, with three more bands at Seacrets (Power Play, Innasense and The Benjamins) and free OC  Beach Lights laser shows along the Boardwalk at N. Division Street at 9:30, 10:00 and 10:30 America’s birthday bash will keep rocking all weekend long.